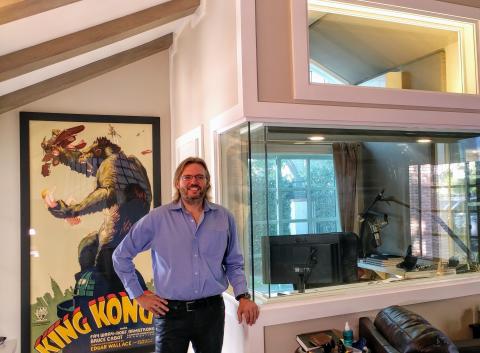 A sunny, custom built glass enclosed voice over booth with breathtaking outdoor views.  A state-of-the-art recording space where you peek over the mic and you are overlooking the sea. Working from a home voice over studio never looked so good. In fact, it is not accurate to call them “home” studios anymore. These are professional voice over studios for professional voice actors that happen to be in a home, and they sound as gorgeous as they look.

Like you, we at VOPlanet geek out over gear, especially when it is set up in such amazing spaces. So, we chatted with the expert: George “The Tech” Whittam. George is famous in the voice over community for (among other things) designing brilliant studios and audio chains for the top voice actors in the industry. He’s a good man to chat with about cool studios.

Let’s talk about Howard Parker and his studio. You designed an amazing recording space. Just breathtaking. What was Howard’s concept going into this project?

Howard wanted his "last studio," his best creation yet. Knowing Howard, though, it's likely not to be his last. He wanted to have lots of light, and not feel too much like he's inside a box. He also wanted to be able to see the beautiful cut-glass window on the exterior wall, that was in existence beforehand. Beyond that, the rest was left up to me. I wanted to keep the ceiling in the studio as high as possible and follow the vaulted ceiling line.

What were the biggest challenges bringing Howard’s vision to life?

First, finding a builder willing to take on something totally new, but on a smaller scale than a whole home build, isn't an easy task. Many of the great builders/contractors I've used over the years have become too busy on large/big budget projects to take on something like this. Engineering the shape of the room and a way to support such a large glass opening was a bit tough and require collaboration with the builder, George Beavers. While I have visions and ideas for designs, it's often the builder who is left to solve the problems of exactly how to build something. I was also concerned about the acoustics of the space, how it would work out with so much glass.

Tell us more about the acoustics of all that gorgeous glass…

Yes, glass and good sounding voiceovers typically don't mix! A few keys to making it work for Howard include a completed dead bass trap on the ceiling that sucks away all sound traveling upward. Next, all vertical surfaces that aren't glass are almost completely covered in the best acoustic treatment possible, including the door. Even the soffit over the desk with lighting built in is an acoustic absorber. I did hang some blackout drapes on the exterior window, just in case, but turns out Howard is able to leave them open all the time with no ill effects. It also helps that Howard does not do loud, hard-sell type reads that would make a lively room a real problem.

What’s under the hood? We assume the gear and connectivity are just as impressive as the design?

Howard's studio is pretty traditional in its signal flow. He's been at this a long time and we take a "if it ain't broke, don't fix it approach". From his U87 or 416 goes a Focusrite Red 7 preamp for each (out of production), then into a Mackie Onyx 1220i mixer.  The signal passes out of the booth to a Avid Duet made by Apogee. The Duet connects to a Mac Mini 2018 with a 4K monitor on his desk outside the booth, and another inside the booth. He can control the system from inside or outside the booth with dual keyboards and trackpads. He uses an iPad pro inside the booth to read his scripts. There's also a Genelec studio monitor system outside the booth on the desk. Howard uses Pro Tools 12 for recording, dual Telos Zephyr Xstreams (1 for backup) for ISDN, Skype for phone patch, and Source Connect Pro.

Now let’s chat about Joe Cipriano’s beautiful studio. First you designed the space with Joe a few years back. What was Joe looking for?

Yes, we did this studio about 10 years ago, in fact! Excuse my hazy memory of some of the details. Joe came from radio broadcasting so he liked being "in the studio, not in a booth." He had seen another studio he liked that had a corner made of glass floor to ceiling. We compromised and did the pony wall instead, which was a better choice for the budget and for acoustics. Of course, he also needed it to be as quiet as possible, as well as acoustically dead but natural.

How did you go about creating the space?

We looked at the design of the other studio he'd seen as a starting point. We discussed his needs and I worked out a design for his standing desk workstation, which was the centerpiece of this studio. We had to figure out how to build this room to have excellent isolation, while it was going to be in a part of the existing structure that was actually partly an addition. There were two different rooflines, which made it more challenging. We also had to tie into the HVAC system and still keep things quiet, always a challenge.

Joe does a lot of high profile VO work from his home studio, what did you do to ensure he has a quiet place to record?

We built the walls and ceiling to be 100% mechanically isolated from the exterior structure. Every place that had to be braced for structural integrity we used isolation clips and brackets from Kinetics Noise. The ceiling was completely floating on springs from the roof joists, too. All walls were layers of drywall with GreenGlue visco-elastic decoupling compound. The doors were doubled, hung in tandem, to create a sort of "airlock". When he needed it to be extra quiet, he closed both. We kept the existing exterior windows but added heavy glass interior windows on hinges. He used the space between the windows to keep small collections of objects. The window between the studio and his office area were also doubled with a large air gap, and the glass used is laminated like a car windshield to eliminate resonance. The floor was on a concrete slab so I didn't really concern myself with floating the floor.

Then recently, Joe had you install a new StudioBricks booth. How did that complement his existing set-up?

The StudioBricks booth is in his current home, having sold the home with the custom built studio. He went that way because it made more sense to him to have something he could move or sell when he and his wife move onto the next home in retirement. His entire operation is housed inside the 5x6' StudioBricks Pro triple-walled booth. While waiting for the StudioBricks booth to arrive from Spain Joe had a temporary booth I made from moving blankets and acoustic panels hung on a PVC pipe frame. It sounded good, but it didn't keep out the sound of leaf blowers and helicopters. The StudioBricks DOES!

Let’s talk gear. Is Cip pretty picky about his tools?

His previous studio was "old-school" with a lot of outboard gear, Telos Zephyrs, preamps from Avalon and Focusrite, Logitek digital broadcast console, LA3a compressor, Digidesign Mbox 2, and other bits. Now in his new place we let go of the old ways and went entirely digital and virtual, using the Universal Audio Twin Solo as the centerpiece of the studio. It takes the place of his preamps, mixer, compressor and Mbox. I designed signal processing chains in the UAD console to get the sound he was looking for, and his clients expect.  He uses Sennheiser MKH416 and Neumann U87 for mics. Joe is a Pro Tools guy from way back, and still uses Pro Tools on his Mac Mini 2018 system. Studio monitors are Presonus ERIS 3.5's, which work pretty well in the small space.

As you can see, home voice over studios have come a long way since the days of recording from your closet. A great home studio is a fantastic investment for any professional voice actor who loves working in luxurious studios with all of the latest pro gear without having to leave their home.