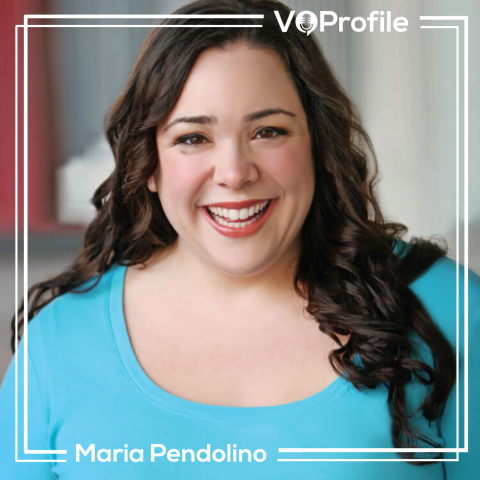 The Talented and Versatile Maria Pendolino

Look up the word versatile and it’s quite possible that a photo of professional voice actor Maria Pendolino is right next to it. I mean, Maria is everywhere. People ask questions about every imaginable aspect of voice over on Facebook. When someone posts a question about gear, Maria eloquently answers first. Another voice actor posts a question about accounting, Maria answers first and gives brilliant advice. Who is that leading a class on negotiation for voice actors? Maria Pendolino! Who is that belting out Celine Dion at the karaoke bar? Gotta be Maria.

Then there is the sheer range of Maria’s voice acting.  From slinky smooth commercial voice overs to highly technical medical jargon, Maria is a voice over chameleon. We are quite lucky to have Maria on the VOPlanet VO Team and even luckier that she had moment between all her awesome endeavors to sit down and answer a few questions about her training, career and the future of voice over casting.

What was your first job?

My first job was washing dishes at an Italian restaurant. I was also a supermarket cashier, and a camp counselor that taught horseback riding to kids.

As a kid, I always loved giving voices to our pets and doing mini-impressions of accents, etc - but I’m not sure exactly when my consciousness that voiceover was “a thing” started. In college I did some sort of IVR job by leaving phone messages in an American accent for an Australian company. But my first real VO job was doing a radio commercial for a local college in Buffalo in 2010.

What were you doing before becoming a full-time voice actor?

I have been acting since age 11 and went to college for English and theatre. But when I graduated, I took a full time job with a bank that helped me move from my hometown of Buffalo NY to NYC. I was planning to quit and pursue my acting career after just a year. And well, it didn’t happen that way! I left my banking career after 10 years to pursue acting full time and took a side job at a mentoring non-profit to help make ends meet. I was appearing in musical theatre, TV and film and looked to commercials and VO in general as way to try to make money in between gigs. I was a recurring character on a TV show on Lifetime and was booked out for a month for shooting days but there was only actually 9 days of travel and work on the show. So, I was hoping to use VO gigs to fill the gaps in between shooting days.

Tell us about your training. You seem to know every aspect of the business!

Well, my acting training and technique runs deep, since I’ve been doing that the longest. I’m trained in both Adler and Mesiner acting techniques as well as Alexander body work and Linklater voice technique. Then just general scene study, monologue study and improv. I’ve been taking vocal singing lessons and coaching in musical theatre and legit/classical singing since middle school. I also play the piano, bass and violin - I do think my musicality plays into my VO sensibilities.

My VO training specifically comes from working with excellent coaches and teachers in both ongoing coaching relationships and master class settings. I’ve had the privilege of learning from Lisa Fischoff and Stacy Seidel Tea - the powerhouse team behind Broadcasters in NYC, Toni Silveri, Pat Fraley, MaryLynn Wissner, Elizabeth Bunnell and more. I’ve also enjoyed learning from my peers at conferences like FaffCon and thru FB forums. I’m completely self-taught on the recording and editing side of things and have learned a lifetime’s worth from YouTube. I’ve also worked with George Whittam to finetune my processing stack.

And while my time working for the bank didn’t directly contribute to my VO technique, I joke that it was a free MBA. That’s where I learned how to use Microsoft Excel to its fullest power and where I learned things like project management, process efficiency, budgeting, negotiation, how to hire and fire, customer service, basics of accounting, etc. I think my time at the bank allowed me to immediately think of my VO career like a business and not just an artistic pursuit or artistic expression.

How did you make the transition from working for someone else to becoming self-employed in VO?

So from 2010-2014, I did VO alongside my other acting work and my non-profit work. I’m 2014, I basically “retired” from stage and on-camera acting and had VO as my sole performance focus. I still had my non-profit job. Then, by the end of 2015, VO was my primary source of income and I was able to consider myself a full time voiceover actor.

What to you is most challenging and what is best about working from home?

I personally love not having to get up and commute - I am not a morning person! I love having access to my home and my kitchen throughout my work day.

I will say that it’s hard not to let your work life bleed into your free time. It’s so easy to just pop in the booth and knock something out for your clients or answer emails on your cell phone while watching TV. Trying to preserve weekends or days off and having a start time and end time to your workday are boundaries that I have found very helpful in establishing work life balance. That said, if a client in LA wants to record at 9pm EST or a client in Germany wants to record at 6AM EST - I’ll do my best to accommodate.

Knowing you do it all, is there a genre of voice over you enjoy most?

I truly love doing e-learning and corporate narration. I get hired a lot to bring a friendly, youthful, millennial and approachable sound to texts that are sometimes very serious and dense. But it can be rewarding to know that you are helping people understand important topics. For instance, I just did a series of videos about how to give children medication when they come home from the hospital while receiving cancer treatment. I’ve also narrated safety presentations about how to handle hazardous substances in your workplace. It might not be sexy, but it’s critical.

And I’m sure to no one’s surprise, I love character and animation work - especially accent work. I have an Eastern European character voice I just got to do for a video game bring produced in Serbia and I had more fun in that one-hour session than I have had in a long time!

As a known voice actor with all the great experience you have described, where do you see voice over casting going over the next five years?

As millennials and Young Gen-X employees take over more leadership positions, I think we are seeing the buyer profiles change. The people who hire me today in voiceover don’t work for the big advertising agencies like the BBDO and JWT’s of the world. There are more content creators than ever and more VO jobs than ever. And new types of jobs and voice usage too. It’s not just TV and radio commercials and two categories of industrial anymore. A pre-roll advertisement in front of a cat video on YouTube can be seen by 40 million viewers and prime time television shows on major broadcast networks struggle to get to 3 million viewers. I think adapting to this new paradigm has been harder on some than others. But the world we live in is that people who need something - a product, a service or a recommendation - go to an app or Google to find what they need. Online casting will continue to be a growing part of the voiceover marketplace. I think there will always be top tier talent getting jobs exclusively thru their representation but there is a huge non-celebrity class of talented VO professionals who have built stable, successful six figure-plus businesses using a combination of sources to find new clients and jobs.

There’s no doubt that more and more voice buyers will be finding and hiring Maria. She’s inevitable, in the best possible way. Maria is an award-winning professional with a wealth of expertise and can bring any script to life. Check out Maria’s versatile voice at VOPlanet.com/maria-pendolino, where you can listen to her demos and hire her direct.