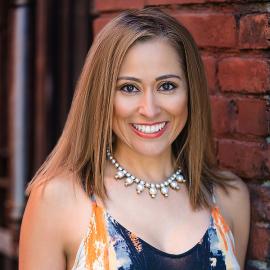 Zuleika is a well known personality in the Latino Community in Seattle. She had a radio show in multiple local Spanish radio stations. With her charm, and out-of-the-norm personality won many followers with her show “Rock Radical” for 8 years.

In addition, she was a regular guest in a popular sports show on ESPN-Seattle. She also co-hosted a morning talk-show with Univision News Anchor, Jaime Mendez.

On TV, she read the news for Univision-Seattle for their 1 minute news segment.

Zuleika or “Z”-as clients call her- creates the Spanish version for TV, radio, Industrial or IVR projects. She can translate, adapt, cast, direct and produce any project. She has fully produced projects for Pappa Murphy's, Starbucks, Dairy Gold, Shoe Carnival, Coinstar, Amazon, Dreambox and many others.

Special Skills
Commercial
Documentary
IVR, Voicemail, Phone Systems or On-Hold Message
Podcast
Training, Business Presentations, Sales and Web Sites
Union
Non-Union
About
Zuleika Deciga has 14 years of experience doing voice overs in Spanish and English with a Spanish and World accent. She was born and raised in Mexico City. She has a BA degree in Journalism and Communication from National University in Mexico (UNAM). Writing for newspapers, doing radio and TV gives a fresh perspective for the projects she works on. Zuleika’s voice has been used for the GPS of the following car brands: BMW, Renault, Nissan & Toyota for the US and Latin American markets. She records on a regular basis for National TV & Radio spots. Shoe Carnival, Mac Donald's, and Starbucks are some of her clients. Her voice was used for the "Siri" version in Spanish for Google and Android software. Her voice was also used for Dragon Software as "Angelica". She has done internet and industrial videos for Amazon Prime, Microsoft, Expedia, The City of Seattle, The World Bank, The Mariners, Savers and many more. Please check her resume to find out more.

You must be logged in to message Zuleika "Z".