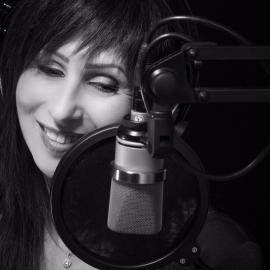 Today, Simone is fully booked by the best national and international voice banks and independent agencies, not only for her Spanish Voice Over skills, but also for her English‐to-Spanish translation and proofreading services, creative copywriting and audio imaging productions.

She's a big referent in her Spanish VO Community worldwide for her VO Narration Techniques courses, for which she's been invited throughout Latin America at different conventions and conferences. She coaches students online daily, as well.

Special Skills
Audiobook
Commercial
Documentary
IVR, Voicemail, Phone Systems or On-Hold Message
Podcast
Promo
Training, Business Presentations, Sales and Web Sites
TV Show or Movie
Union
Non-Union
About
Born in Montevideo, Uruguay, Simone is the most successful voice that her country of origin ever exported, being one of the top female Spanish Voice Over Talents in the United States.

She has built a rich, outstanding career for nearly 30 years, which began while studying Mass and Social Communications.

For her English and Spanish Voice Over work on Radio and TV campaigns, Simone has received major awards globally, with prizes bestowed multiple times by the Clio Awards, the New York Festival and Cannes International Film Festival. In Uruguay the Woman of the Year Awards named her that country’s Best Radio Personality.

Through the years, Simone has built an enviable list of clients with whom she maintains a fluid, long‐term, even personal relationship. Based in Florida, she works from her professional home studio on a daily basis.