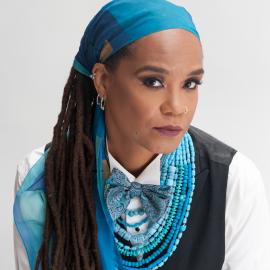 Languages
English (North American)
Spanish
Accents and Dialects
Southern United States, "Urban" or "Hip-Hop," African American, Western African, Caribbean
Voice Age
Young Adult
Middle Aged
Senior
Experience
A classically trained actor and has been doing voice work, public speaking, and otherwise performing for over 30 years. She has won numerous competitions in performance from the time she was very young and consistently since - locally, regionally, & nationally.
She was a high school English Language Arts & Critical Literacy teacher and is a published writer of poetry and social commentary. Her degrees in Psychology, Biology, Theatre, Philosophy, and Education and her practice and study of a plethora of spiritual systems lends a unique well from which to draw equally unique perspectives on the human condition.

She's brilliant at what she does because she can not only conceptualise, but she can embody...even with only the voice as her vehicle.
Special Skills
Cartoon / Animation
Audiobook
Commercial
Documentary
IVR, Voicemail, Phone Systems or On-Hold Message
Movie and Game Trailer
Other (On-Camera, Informercials, Live Announcers, Spokespersons)
Podcast
Promo
Non-Union
About
Oni OM is the principal talent and Chief Vocal Artist at Unstoppable Vocals. She is a classically trained actor and has been doing voice work, public speaking, and otherwise performing for over 30 years. Her voice has been described as "golden." She is lauded for her "one take" professionalism; often requiring only one recording. She has won numerous competitions in performance since she was very young - locally, regionally, & nationally.

She says she's been curating her voice since she was 8 years old. We believe her...so will you.