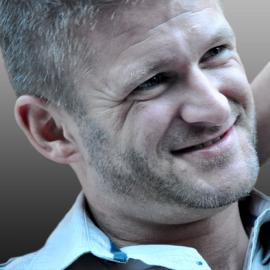 The guy next door. Only better. And British.

Languages
English (Australian / NZ)
English (British and European)
English (United Kingdom)
Accents and Dialects
British English, Australian English
Voice Age
Young Adult
Middle Aged
Experience
10+ years as a full time voiceover artist, and almost 30 years field experience in radio and TV (as talent and producer/director). I've voiced thousands of projects for clients all over the world, from Blue Chip companies and broadcasters, to small businesses and individuals.
Special Skills
Commercial
Documentary
IVR, Voicemail, Phone Systems or On-Hold Message
Other (On-Camera, Informercials, Live Announcers, Spokespersons)
Podcast
Promo
Training, Business Presentations, Sales and Web Sites
TV Show or Movie
Union
Non-Union
About
Being British, I'm not naturally given to bragging. Then again, my voiceover work has been described as "exceptional", my performance as "spot on in the first take", and my delivery as having an "effortless authority". Others have praised the ease of working with a "consummate professional" "who takes direction well" and is "committed to delivering 150% each time". That's probably why the overwhelming majority of my work comes in the form of repeat business from valued, happy clients who know they can trust me to deliver.

My proudest career achievements have included ten years as a newsreader for the BBC World Service, and narrating TV documentaries for the likes of HISTORY and National Geographic – probably because I've always felt most at home behind a microphone and telling stories.

In 2014, after two decades in London, I followed my dream to live in nature. Nowadays I enjoy log cabin life in the forest with my American partner, two rescue dogs – plus a couple of pet goats, and couple of dozen chickens – in the beautiful Blue Ridge Mountains of North Carolina. So, after all those years in the big city, my morning commute is finally one I look forward to: 17 yards from the house to my home studio, as the sun rises over the hills outside Asheville. And fortunately, high-speed cable internet means I can still be the "guy next door", no matter where you are in the world…

In the Spring of 2018 I became a naturalised U.S. Citizen, which I guess now makes me "The guy next door. Only better. And British. And American!"