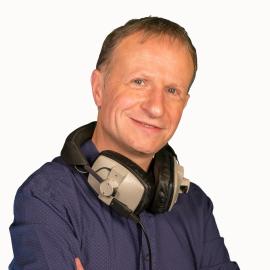 He works from professional studios in Oxfordshire which deliver broadcast quality, but he's just as happy to travel to studios across the UK. He's available to record every day, can deliver fast turn-around times, and even make direct connection to your studio if required through Source-Connect Now.

Mark has also created a wide range of character voices from an animated cat commentator on the latest series of Hot Wheels Pet Prix videos, to a werewolf, pirate, robot, Santa, and many more. He also specialises in the 1940's newsreader voice that you hear on classic Pathe newsreels, British Movietone News and old BBC archive.

On a weekly basis, Mark voices a wide variety of projects including corporate videos, TV and radio commercials, explainer videos, e-learning, podcast intros, live show announcements, video game characters, sales training, telephone messages and programme narration. Mark's flexibility is sure to suit your next project, so get in touch today.