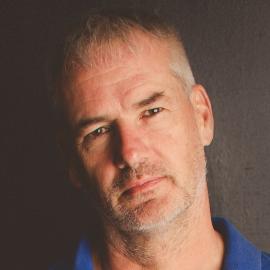 Corporate & Explainer Voiceover
His corporate and commercial client list includes international companies like Coca-Cola, Samsung, Intel, UPS, Mastercard, Nestle, Mini, Heineken, Club Med, Pedigree, Philips, and The United Nations among others. Featuring a clean, clear and concise sound perfect for corporate narration and explainer videos, Ian has been featured across the internet and behind the scenes in many Instructional Design and eLearning projects.

Video Game & Animation Voiceover
Ian’s character voice work has been featured across the gaming industry, in both narrative and trailer spots for games like PayDay 2, Warhammer 40k, Endless Space, Bards Tale IV, Seven The Days Long Gone and more. As a talent in the Animation field, his voice can be heard as the Villainous Vulture Snr in the hit children's animation Badanamu and can be heard in the trailer for the upcoming Rooster Teeth Series Gen:Lock The versatile style of Ian’s voice lends itself to character interpretation that truly connects with audiences.
Special Skills
Cartoon / Animation
Commercial
Documentary
Movie and Game Trailer
Promo
Training, Business Presentations, Sales and Web Sites
TV Show or Movie
Videogame
Non-Union
About
My first encounter with Voice Acting was as a Soldier in a WWI set Radio Play and as the voice of Paul McCartney's 'Teacher' in a pre-recorded interview for Radio City in Liverpool in the mid '80s. Roll forward to the late 2000's and my wife bought me a Christmas gift of a One day Introduction to Voice Over with JP Orr in London. Workshops with Yvonne Morley (former Head of Voice at LAMDA) swiftly followed. It got really serious when I opened my Voice Over Business in 2014 and in 2017 recorded over 300 projects for clients in all corners of the Globe (If a globe can be said to have corners!)