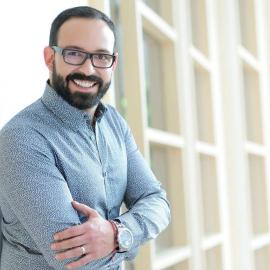 Versatile voiceover, with 14 years of experience, recording for national and international brands and campaigns, the right voice for your project.

Languages
Spanish
Accents and Dialects
Neutral Spanish, Mexican
Voice Age
Young Adult
Middle Aged
Experience
14 years of experience in the dubbing industry and 21 in broadcasting.
Text decoding specialist. Expert in Natural, institutional, promotional and documentary storytelling styles. Voiceover coach Since 2015.
Special Skills
Commercial
Documentary
IVR, Voicemail, Phone Systems or On-Hold Message
Movie and Game Trailer
Promo
TV Show or Movie
Union
About
Degree in communication and public relations, graduated from the Universidad Latinoamericana. His attraction to the media led him at an early age to work in the magical world of radio. In 2001 Radio Education 1060 am, opened its doors to collaborate as a production assistant in the programs "Unforgettable grammar", "the bunk" and special programs. It was then that he would fall in love with the commercial voice and radio, which led him to prepare and obtain the voice over license. A few years later he achieves his dream of entering the wonderful world of commercial speech by being the voice of such large and important brands nationally and internationally as: