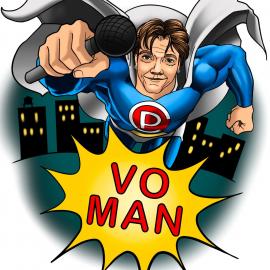 Languages
English (North American)
Accents and Dialects
British, Russian, Southern, Rich and Educated, Professor, India, Gruff Army Guy, Superhero and more.
Voice Age
Young Adult
Middle Aged
Senior
Special Skills
Cartoon / Animation
Audiobook
Commercial
Documentary
IVR, Voicemail, Phone Systems or On-Hold Message
Movie and Game Trailer
Other (On-Camera, Informercials, Live Announcers, Spokespersons)
Non-Union
About
I've always been told I have "a Voice. (Some might say a big mouth.)
It all started as a motivational speaker. Speaking to groups of all ages and all walks of life. Business's, schools and family's. From 30 to 3000 people.
Also as a personal fitness trainer, from behind my drum set, on tv, radio and more. Using my voice to help to bring others some joy.
Being a Voice Over Actor has been a passion since I was a kid. Having interviews and making voices to whoever would listen.
I'm also a husband, father, a cool goofy grandad, superhero nerd, and a Ernest P Worrell Fan.
And yes, I have a cape.