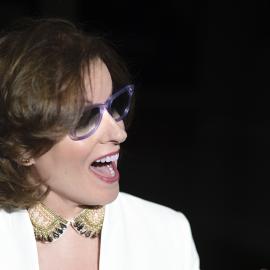 This professional, non-union vo artist wants to be your voice! From my studio, I do a range of authentic reads-conversational, trustworthy, or sarcastic for commercials & politics, dramatic or warm for narration, engaging for promos & radio imaging

Languages
English (North American)
Accents and Dialects
US General American, NY/NJ/Long Island, light Southern
Voice Age
Young Adult
Middle Aged
Experience
I live announced this year for the News & Documentary Emmy Awards.
While at NBC, I was VOG for the NBC News Education Nation live three-day event, did Dateline vo’s, and wrote and voiced news reports for NBC Radio.
I’m the voice of JLTV (Jewish Life TV) and Visitors TV Network (an in-room hotel channel), been a character in a DVD educational series, and done many health spots among other things.
I'm really anxious to expand my work in radio imaging and politics.
Special Skills
Commercial
Documentary
IVR, Voicemail, Phone Systems or On-Hold Message
Movie and Game Trailer
Other (On-Camera, Informercials, Live Announcers, Spokespersons)
Podcast
Promo
Training, Business Presentations, Sales and Web Sites
TV Show or Movie
Non-Union
About
With a career at the crossroads of production and technology, I was VP, Connected TV, at NBC News. I was immersed in TV Everywhere, over-the-top devices, content partnerships, and interactivity.

One day I realized I'd like to be the one voicing the promos I was asking the marketing folks to create for interactive projects.

So I started to train.
I’ve studied with Marla Kirban, Bruce Kronenberg, John McKinney, Paul Liberti, Jack Hossenlopp, and most recently Amy Marcs who continues to be my coach.

I’m based in Manhattan and happy to audition in person or via .mp3. I have a home setup.

I also consult in digital media and, as a theater junkie, am working to expand the arts audience through digital innovation.

As a writer and producer at CBS News, I earned two Emmy awards for "In the News."