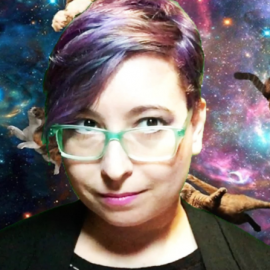 Character Reel - 2021
Music Demo - Singing - Vocalist - various styles
Highlights of types of character voices I am often hired to do for games, audio drama, and educational animation.
I am the lead singer of the "I Expect You TO Die" theme song
Recent Work

Also an active vocal artist, her voice can be heard in games like "Pathfinder: Kingmaker", "Death and Taxes", "Water Bears," and "Wasteland 3", audio dramas and radio plays like "Codename Blank", "Mandible Judy", Cryptic Canticles' "The Dracula Radioplay Experience" and "The Call of the Flame: An Audio Play", and as a recording artist singer/vocalist on a variety of video game soundtracks and tribute albums. She regularly performs with a variety of live and virtual operatic, choral, and musical ensembles, co-created and produced the original productions “Evenings in Quarantine: The Zombie Opera“, “Super Smash Opera“ it’s sequel “Aria Kart.”

Bonnie has served on the boards and committees for a variety of organizations including The National Audio Theatre Festivals, Great Lake Film Association, Pittsburgh Savoyards, Game Audio Network Guild, and the Interactive Audio Special Interest Group. She has been judged for Spillprisen, IGF, Indiecade, and the GLFA, worked as an audio text book proposal reviewer for Focal Press, and has spoken at events such as AES, MAGfest, GameSoundCon, SXSW Gaming, VGMtogether, PAX South, PAX Dev, Confluence, and GDC. She has lectured at Berklee School of Music, Duquesne University, Teknofonic, and taught audio for games and animation at the Art Institute of Austin.