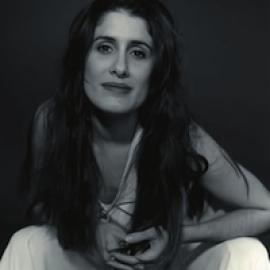 A "picante" Latina voice believable enough to be dangerous!

Languages
English (North American)
Spanish
Accents and Dialects
Hispanic accented English. Spanish: Latin American Neutral, Venezuelan, Colombian.
Voice Age
Young Adult
Middle Aged
Senior
Experience
Arnaly has under her belt more than 30 years of experience as a performer in Radio, TV and Theater in her native Venezuela and North America. She is very sought after for e-Learning and Corporate where her natural narrative style makes any text entertaining and engaging. At an international level, Arnaly has recently been the voice of important companies like ScotiaBank, UBS, VMWare, Honeywell VoCollect, and Priority Pass "Lounge Key" among others.

Arnaly is licensed to be a voice over in her native country of Venezuela. She has singing studies with Cuban professor Lina Brando. She worked in theater under the direction of José Simón Escalona and later on pursued a Music degree at McGill University in Montreal where she graduated as a composer with a minor in Jazz piano. Besides being a voice over talent, she is a music composer, arranger and producer. She has her own professional studio where she is able to produce an entire commercial for broadcast.
Special Skills
Cartoon / Animation
Audiobook
Commercial
Documentary
IVR, Voicemail, Phone Systems or On-Hold Message
Podcast
Promo
Training, Business Presentations, Sales and Web Sites
Non-Union
About
Native of Venezuela, Arnaly moved to Montreal, Canada where learned to speak English, French and Portuguese fluently. Being a young girl, Arnaly performed in TV and Radio in her native country while singing and in theater performances. As a young adult, she had her own show on Jazz 95.5FM for many years until she moved to Canada where she started her Internet voice over career.

Arnaly's accent is Latin American Neutral, but she also speaks with her own Venezuelan and Colombian accents. When speaking English, she keeps her original Latin American accent but her fine pronunciation has given her the opportunity of being the Hispanic accented voice for many North American and European companies around the world.