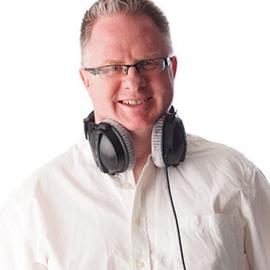 A versatile performer with a wide variety of styles. Noted for friendly & warm personas.

Languages
English (Australian / NZ)
Accents and Dialects
Australian, British, American, European.
Voice Age
Young Adult
Middle Aged
Experience
My First professional voice over was in 1988 and I haven't stopped since. Combining my two career passions means I have a clear and focused understanding of how important the right voice and character is to the script and the story. My voice has appeared in radio and television commercials, corporates, feature films and animations both here in Australia and internationally.
Special Skills
Cartoon / Animation
Audiobook
Commercial
Documentary
IVR, Voicemail, Phone Systems or On-Hold Message
Training, Business Presentations, Sales and Web Sites
TV Show or Movie
Non-Union
About
I watched FAR too much TV as a child, but in a good way! The Warner Brothers Looney Tunes are very close to my heart, as are the wonderful films from PIXAR. To be honest, I love any good drama, comedy or animation. I have a theatre and theatre sports background, but for many years I've also worked as a re-recording mixer and sound designer in Australia, Asia and the United Kingdom. Being a voice over artist gives me the opportunity to combine two of my favourite things - performing and telling a story with sound.