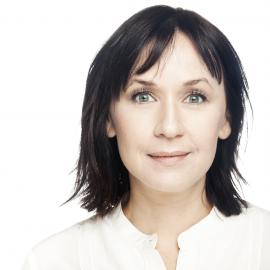 Voice Over with Emotional Intelligence

Languages
English (North American)
Accents and Dialects
RP, American Southern, Midwest, East Coast
Voice Age
Teen
Young Adult
Middle Aged
Senior
Experience
Six years, and counting, as a professional voice artist. More than a decade of voice and speech training. Twenty plus years as a professional stage actor.
Special Skills
Cartoon / Animation
Audiobook
Commercial
Documentary
IVR, Voicemail, Phone Systems or On-Hold Message
Movie and Game Trailer
Other (On-Camera, Informercials, Live Announcers, Spokespersons)
Podcast
Promo
Training, Business Presentations, Sales and Web Sites
TV Show or Movie
Videogame
Non-Union
About
Alix was born and raised in Los Angeles – yes, some people are actually from LA. She fell in love with theatre and the joy of performing on stage at a young age and was lucky enough to begin studying soon after. First at the Pasadena Playhouse’s Young Actors’ Program, then the Lee Strasberg Theatre & Film Institute, the prestigious Los Angeles High School for the Arts, the UCLA School of Theatre, Film, & Television, and finally the Professional Theatre Training Program at the University of Wisconsin, Milwaukee. Yes, she moved from sunny Los Angeles to the frozen tundra for the love of theatre. She loved it so much in fact that she continued to live and work in the theatre there for several years after.
But it wasn’t her last move for love. Years later, during a misguided detour through law school, she found herself in Vienna, Austria, in love. Without her usual theatre outlets, and after a lifetime of nudging by others, Alix finally discovered voice over. It has become the great (professional) love of her life.
Alix takes her more than a decade of voice and speech and acting training, as well as her more than 20 years (ongoing) work as a professional actor and applies them to her voice over work. Her vocal training gives her a nimble, flexible voice for any genre. Her acting experience allows her to connect to any text on a deep level and convey a feeling to the listener – not just information.
Alix has a fully equipped home studio, including Source Connect. Her location, and a very understanding spouse and 2 cats, allows her to be available at extended hours for all time zones.
Outside of voice over, Alix is on the Board of Open House Theatre. She’s also an ardent animal lover – a passionate, but not preachy, vegan. The discovery of vegan baking, however, has been a slippery slope.
While she is most recognizable as the voice of an A.I. (Star Citizen, Squadron 42, Elite Dangerous, HCS Voice Packs), it is her “E.I.” that sets her apart as a voice artist.